Posted at 09:00h Blog, Health In A Hurry by deborah 0 Comments 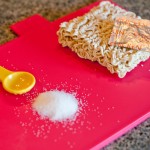 Doesn’t it always seem like the things that are really bad for you taste really good? Take salt, for example. It doesn’t taste great on its own, but it sure does bring out the flavor of foods. I think that’s why it’s used so liberally in processed and restaurant foods. The manufacturers don’t always care about nutrition, but they always care about taste.

But, unlike other dietary indulgences, salt isn’t really the enemy. Your body needs salt to function properly. It just doesn’t need the massive amounts that most people are getting.

When it comes to sodium, there are three things you need to know. There’s the good, the bad, and the ugly.

The good: At the right quantities, sodium helps maintain a good balance of fluids in the body. It helps transmit nerve impulses, and helps your muscles contract and relax.

The bad: Most Americans consume about 1,000 more milligrams each day than they should. Dietary Guidelines recommend less than 2,300 milligrams a day. A high-sodium diet has been linked to high blood pressure, which can lead to a heart attack or stroke.

The ugly: Cutting back on sodium isn’t as easy as throwing out your salt shaker. According to the CDC, 44 percent of dietary sodium comes from 10 unexpected food sources.

Here are the top offenders: