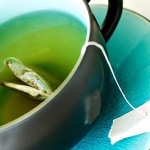 The most highly consumed beverage in the world is water. The second is tea. Tea is full of health-produc­ing, disease-reducing, and anti-aging antioxidants. The Chinese have known about the health benefits of green tea since ancient times, using it to treat ail­ments such as headaches, stomach disorders and depression, just to name a few. Cultures that drink primarily tea have much lower levels of disease.

Green tea is full of health producing, disease-reducing and anti-aging antioxidants. The high anti-oxidant activity protects the body from aging due to free radicals.

Drinking green tea has also been shown to:

Tea contains flavonoids, which are naturally occurring compounds that have antioxidant properties. Antioxidants work to neutralize free radicals, which scientists believe, over time, damage the body by accelerating the aging process.

The more processing that is done to tea leaves will result in lower polyphenol content. Black teas are oxidized or fermented, so they have lower concentrations of polyphenols than green tea, but their anti-oxidizing power is still high.

Researchers have discovered that regardless of the processing method, black, green, white and oolong teas all contain polyphenols. In fact, tea ranks as high as, or higher than, many fruits and vegetables in the ORAC score (this is a score that measures antioxidant potential of plant-based foods).

Drinking black tea has been shown to: