Posted at 11:00h Health In A Hurry by deborah 0 Comments 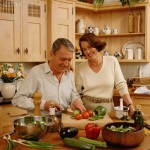 I admit it; I’m a bit of a kitchen klutz. While chopping veggies, it’s inevitable that something drops on the floor. I usually rinse whatever I dropped, but sometimes I just proclaim the “5 second rule” and keep cooking.

Is it safe to follow the 5 second rule? Not so much…

A Clemson study found that in as little as 5 seconds, the dropped food can pick up between 150-8,000 bacteria bugs. After a full minute, the food picked up 10 times that amount of bacteria. If the food is moist (for ex: a piece of raw meat) it picks up even more bacteria.

The study also showed that people were more likely to pick up and eat dropped cookies and candy, but not broccoli and cauliflower!

Today’s tip: Slow down and take your time in the kitchen. Make sure you have a large cutting board, so you will be less likely to drop food.